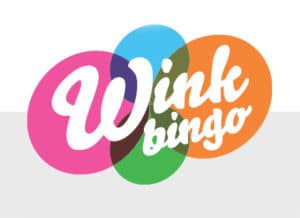 Wink Bingo is a gambling operator founded in 2008 and licensed by the UK Gambling Commission. Players from the United Kingdom can enjoy the most popular types of bingo, as well as an incredible diversity of slots from leading suppliers. All the games can be played for free, but those who make the transition to real money gambling eligible for bonuses. There are also jackpots up for grabs and a long list of payment methods that can be relied upon to cash out such big winnings.

The Wink Bingo welcome bonus is higher than the industry average and has a two-pronged effect, since the money can be used to play bingo and other games. A deposit of at least £10 is needed to be eligible for a 200% bingo bonus and a 200% games bonus. In both cases, players can hope to claim the maximum bonus of £100, as long as they act quickly and apply for these bonuses within 7 days after registration. This will also give new players enough time to meet the two times wagering requirements for the deposit and the bingo bonus, as well as the 50 times play through demands for the games bonus.

Not surprisingly, it is only possible to use the bingo bonus on bingo games. Conversely, the games bonus can be used to play slots supplied by software developers with a lot of experience in this line of work. Different games have a different stake percentage contribution, with keno and slots being the most effective. At the opposite end of the spectrum, players will find roulette, card games, as well as video poker. Players should refrain from withdrawing from their deposit as this will forfeit the bonus.

The ongoing special promotions at Wink Bingo and the VIP program are the ones that provide motivation in the long run. There are four tiers envisioned by the bingo room for its loyalty program and they go by the name of Sapphire, Ruby, Diamond and Black Diamond. The higher they climb up the ladder, the better the rewards get, so members never run out of reasons to play. Mystery jackpots are also to be expected and lucky players are rewarded with bonus bingo tickets and special rewards.

Wink Bingo designers didn’t go for a colorful website and instead, they chose the minimalistic approach. As a result, those who browse its pages will have an easy time reading all the information available about bonuses, promotions and games. The story is told with tongue-in-cheek humor and the images scattered across the website instinctively appeal to casual players. The characters populating the website are cartoonish and stay true to the name of the bingo room, playfully winking to catch the players’ attention.

Wink Bingo found it worthwhile to work with several software developers to provide players with greater freedom of choice. Dragonfish, NetEnt, IGT and Eyecon are the main suppliers of games which can be found in one of the 25 bingo rooms. At the first glance, players might get the feeling that there are many more bingo versions out there, but essentially there are five games to choose from. The classic 90-ball and 75-ball bingo games spend the most time in the spotlight and they can be played for free or real cash.

Players who want to try something different are invited to try Daily Jackpots and Extra Bingo while those who have attained VIP status can play VIP bingo. In any case, players can expect a daily jackpot game from Monday to Sunday, with the biggest prizes being awarded on the final day of the week. In order to get players fully immersed into the Wink Bingo atmosphere, the games themselves were given funny names. Naughty Numbers, Stack Up, The Hangout, Tutti Frutti and Spare Pennies are some of them.

Wink Bingo slots are supplied by the same three software developers that provide the five types of bingo mentioned above. In the category of trending slots, players can find the hottest titles, such as Starburst, Temple of Iris, Millionaire Genie, Fruit Blast and Slingo Rainbow Riches, to name but a few. The obvious alternatives for those who want to take some time off from bingo are keno, blackjack, roulette, baccarat, video poker and scratch cards. They can be played for free or real money and are compatible with smartphones and tablets.

PayPal, Paysafecard, Neteller and EntroPay are some of the most popular Wink Bingo payment methods. They are preferred because of faster withdrawals and the absence of fees, but players have the alternative of depositing and cashing out profits via wire transfer and cards. A minimum deposit and withdrawal amount of €10 is expected, with the funds reaching the accounts of players in up to seven days. They must also add to this the 48 hours pending period that applies to all withdrawals to get the right estimate.

Wink Bingo takes pride in being a mobile-friendly gambling operator where players can use iOS and Android-powered devices. The specialized app can be downloaded from the App Store and Google Play instantly and for free. The alternative is to play the games straight in the browser, but this will hurt the gaming experience. Given the high quality of the dedicated app and the convenient manner in which it can be downloaded, there is no reason to avoid it.

Wink Bingo knows how to appeal to prospective customers, with one of the biggest and most diversified bonuses for new players. Much to its credit, it also has the means and experience to keep existing members happy, through generous promotions and a fully-fledged loyalty program. Slightly faster withdrawals would definitely help, but this is only a minor shortcoming. What is more important is that money reaches the accounts of eligible players on time and securely, regardless of the amount they win.